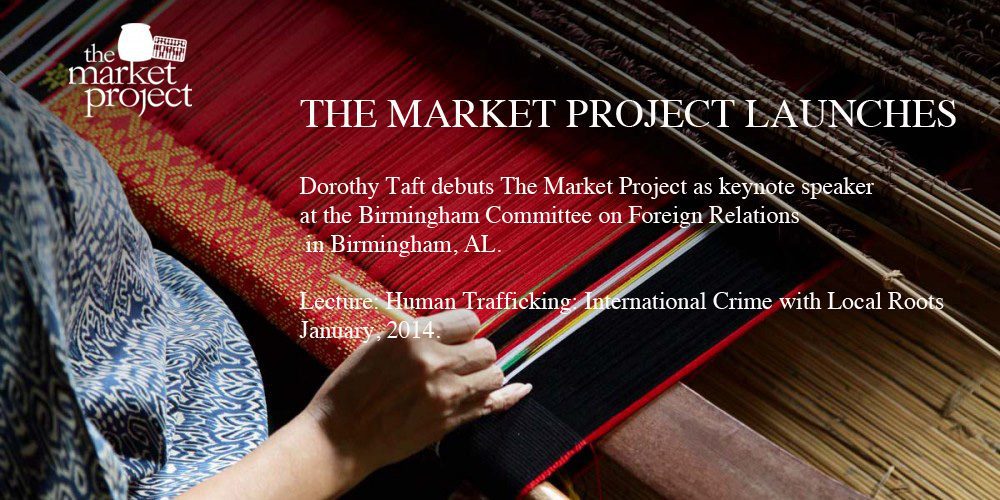 Dorothy Taft debuts The Market Project as keynote speaker at the Birmingham Committee on Foreign Relations in Birmingham, AL.

Dorothy Taft, The Market Project’s Executive Director, had the first opportunity in more than 26 years of professional service to publicly address in her hometown one of the most significant foreign policy issues of our time.

Her lecture “Human Trafficking: International Crime with Local Roots” addressed the problem of trafficking men and women, announced the mission of The Market Project, and dared the audience to action.

Dorothy explained the gravity of human trafficking. Usually Americans are accustomed to viewing this as a foreign or global issue. Instead, she explained, Americans should realize that despite not having a full accounting of trafficked individuals in the United States, hundreds of thousands of US citizen minors are estimated to be at risk of commercial sexual exploitation. This doesn’t take into account men, women, boys, and girls who are trafficked into and through the US from Canada or Mexico.

Highlighting particularly local aspects of this nefarious crime, Dorothy pointed out the ominous nickname for highway I-20 upon which Birmingham sits: “Sex Trafficking Super Highway.” Victims are smuggled all along the corridor that runs through Georgia, Alabama, Texas, all hours of the day, every day. The Well House, a Birmingham organization that was founded in 2011, rescued more than 100 women and girls ranging from 13 to 54 in their first 30 months of work. Of those rescued, 77% were from Alabama, 22% were from other states, and 1% was a foreign national.

Our effectiveness requires that governments take effective steps toward eliminating the scourge of human trafficking. Dorothy explained the actions that were to be taken in the months leading up to the 2014 Super Bowl in New Jersey. State officials were to train and inform law enforcement personnel, hospitality workers, students, and airport employees in how to spot and identify signs of trafficking. A trafficker’s job becomes magnitudes more difficult and prosecution easier when every eye is cast upon the movement, buying, and selling of a person.

Dorothy finished by explained that after having spent years on the front lines of the fight to increase awareness, build commitment from Members of Congress and foreign governments, and craft legislation, she is now focusing her attention on the healing components of aftercare.

For Dorothy, The Market Project is the next step in her life’s passion and work to break the cycle of oppression established by human trafficking.

We seek to launch market-researched, trauma-informed businesses that offer opportunities for safe work to men and women who have experienced trauma, exploitation, and trafficking. We desire to partner with care partners in the survivor’s transition from victim-hood to independence. By helping to build thriving, independent economic engines in communities at high risk for exploitation, our hope is that The Market Project will ultimately play a role in helping prevent this atrocious cycle of exploitation and trafficking from continuing.

We believe that healing is possible even for those who have experienced brutal and complex trauma. As part of that healing process, work provides “a psychological life raft, assuring the survivor that he or she is not completely helpless, that not all is lost.”

“Follow your own heart!” Dorothy challenged the audience, “Having met a number of you already and looking around the room, I know there is an impressive pool of talent represented in this room. I would welcome the opportunity to point you in the direction of informational resources, ways to engage state, national or international policy makers, or take a leading role in civic engagement to combat the slavery of our times.”

Stay up to date on our impact

Join our email newsletter to hear stories of our work.